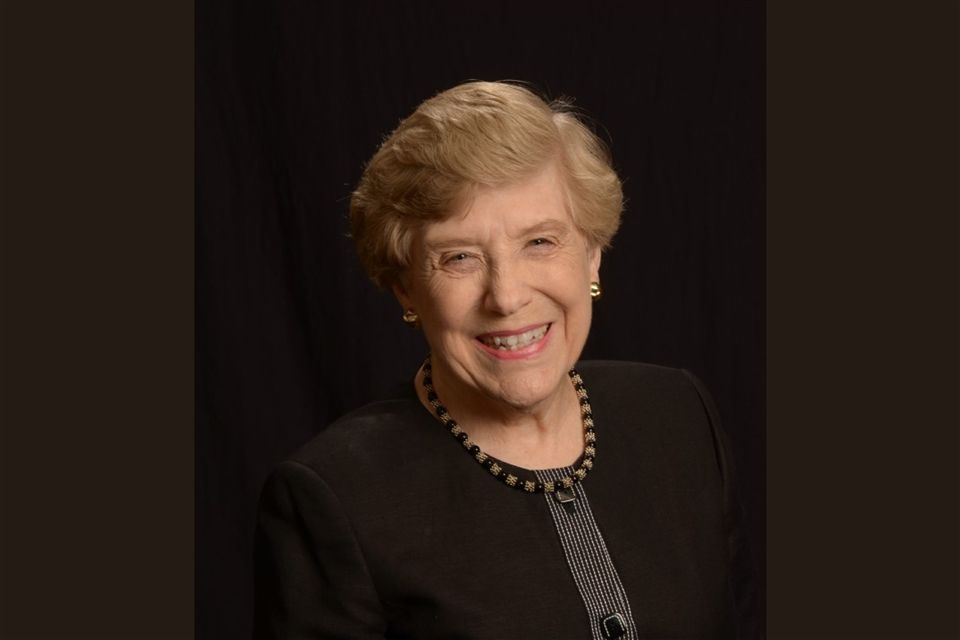 11/1/2019
Ola Morgan Becnel 1951 has been chosen by the Ursuline Alumnae Association of New Orleans, with the approval of the Academy President and the Ursuline Sisters, to be the 2019 Ursuline Distinguished Alumna. This award, granted to Ola Becnel posthumously, is annually bestowed upon a graduate of Ursuline Academy or Ursuline College of New Orleans who demonstrates the core values and ideals of an Ursuline education in all aspects of her life. Since 1986, 51 women have received this honor, making it one of Ursuline’s most prestigious awards.

Ola attended Ursuline Academy for six years and graduated as a Sioux of 1951 - the very first Sioux class. While at Ursuline, she excelled academically, socially, morally, and spiritually. She was an active member of Sodality, Mission Club, and intramural sports. Ola was a leader in her class and was instrumental in selecting the Sioux name. Her classmate, Lucille Weyman Deas, says that “her delightful and kind demeanor made her a friend to be admired by all.” Former teacher, Sr. Mary Margaret Prenger, once said: “My life was blessed in the Fall of 1947, when I was assigned to teach a group of just-beginning-to-find-themselves sophomores at Ursuline Academy. Among them was Ola, a happy girl who thoroughly enjoyed life. She is a true-blue Ursuline woman who embodies the ideals of Serviam and CLC.”

After graduating from Ursuline, Ola attended Loyola University New Orleans where she majored in pharmacy in the accelerated program. She was also very active in college and was chosen for the university’s honor society. She graduated from Loyola with honors and served at Sara Mayo Hospital as a licensed pharmacist. In 1959, she married her husband, Charles. In 1962, the Becnels moved to Metairie where they became founding members of St. Angela Merici Parish and started a family - having seven children.

After thirty years of marriage, an unfortunate and untimely accident resulted in the death of Ola’s husband, Charles. With courage, Ola dedicated her life to her children while continuing to serve her community. Nearly four years later her second daugter Anne, who is also an Ursuline alumna, passed away. Ola’s Ursuline teachings of courtesy, loyalty, and courage quickly became a foundation for her life as she was faced with numerous obstacles and hardships. Father Beau Charbonnet says that he “soon learned the secret to Ola’s strength. Her love of Christ in the Eucharist - and a persevering generosity - was remarkable.” Classmate, Mary Brodrick LaCoste describes Ola as “accomplishing much with grace and a delightful sense of humor.”

Ola’s deep faith and devotion encouraged her to persevere. Nothing stopped her from giving back to the people and the community she loved. Since its inception, Ola served the St. Angela Ladies Auxiliary for many years - several times as a board member. She later served as an ex-officio member as well. She was also a Eucharistic Minister, a pro-life advocate, treasurer and member of a booster club and other service organizations, as well as a participant in many St. Angela Merici groups. She also served on the ARC Board. Ola was a recipient of the St. Louis Medallion for her work and devotion to the Catholic Church. She was co-founder of Special Connections, an adult-oriented special needs group, that held a special place in her heart since her youngest child had Down Syndrome. Ola was instrumental in working with parish officials in formulating the ways public schools worked with those with special needs.

It is evident that Ola has lived the Serviam motto she learned as a student at Ursuline Academy.
Her accomplishments, awards, and kind remarks from friends and family are a true testament of
her dedication. Ursuline Academy of New Orleans is proud to call Ola Morgan Becnel a Distinguished Alumna.

Ola Becnel passed away on July 19, 2019. Her daughter Mary Becnel Plache ’85 and family are receiving the award in her honor.
Back